Get a weekly roundup of the latest news in the display industry. Delivered straight to your inbox.

EarbudsZone is reader-supported. When you buy a product via a link on this site, we may earn a small commission. Learn more.

Home » Learn » What Are True Wireless Headphones And Are They Worth It?

What Are True Wireless Headphones And Are They Worth It?

True wireless earbuds offer an unprecedented freedom of movement and a uniquely satisfying listening experience, but there are still a lot of issues plaguing this new technology, not least of which are its exorbitant price and short battery life. Those who hate cords and want to eliminate them at all costs will not regret buying these earbuds, but others would be better off sticking to regular wireless earbuds for now.

That’s the question most of us ask ourselves when we set out to buy new earbuds or headphones.

And arriving at an answer is simple – if you want the most stable connection and hate batteries then go wired (it’s cheaper anyway); if you value freedom of movement and hate cable clutter then go wireless.

However, audio equipment manufacturers had to go and make our decisions (and lives, if we want to get dramatic) all the more difficult by introducing the term true wireless.

Needless to say, true wireless and regular wireless technologies are indeed different, even though you may not be able to guess what the differences are based on just the names.

So let’s compare and contrast these technologies now to see whether the new true wireless devices are indeed worth it. 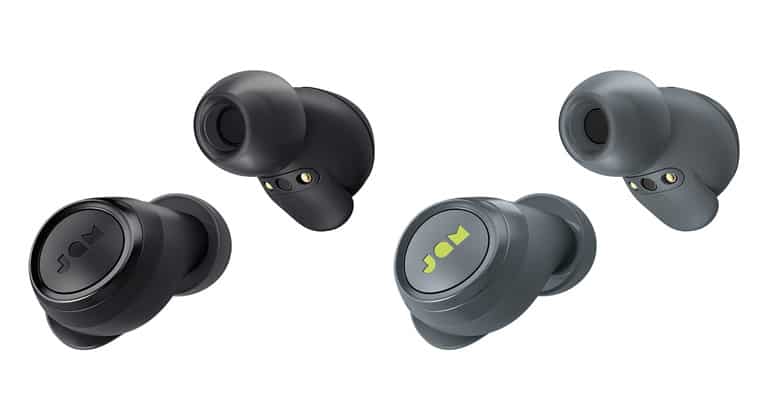 The main similarity lies in the lack of any wires used to connect the earbuds to the audio source. So both true wireless and regular wireless earbuds rely on wireless technologies (most often Bluetooth) to establish and maintain a connection with an audio source (smartphone, laptop, MP3 player, etc.).

So the true in true wireless refers to the absence of a wire that connects the two earbuds. They’re both equally wireless as far as connecting to an audio source is concerned.

What About True Wireless Headphones? 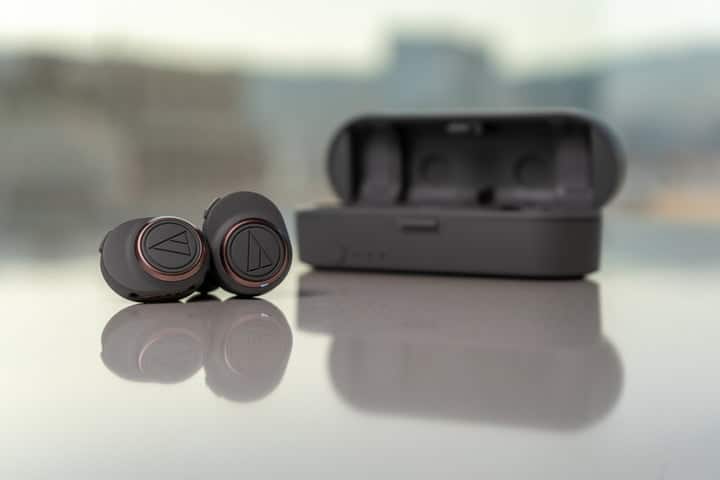 There is no such thing!

At least not if we take headphones to mean what Google says it means: ‘A pair of earphones joined by a band placed over the head, for listening to audio signals such as music or speech’.

The lack of a consistent and standardized terminology is at the root of this problem.

In any case, we can only make the distinction between true wireless and regular wireless technologies with in-ear headphones (hereinafter referred to as earbuds). The ones that go over the ear and are connected by a band that goes over the head (hereinafter referred to as headphones) can utilize only one type of wireless technology. Since they simply have to be connected by a headband anyway, not connecting the two earcups simply for some sort of bragging rights would be ridiculous.

Now that we know what exactly true wireless earbuds are, let’s see whether they’re worth getting over regular wireless earbuds, starting with the advantages of the former over the latter.

The Advantages of True Wireless 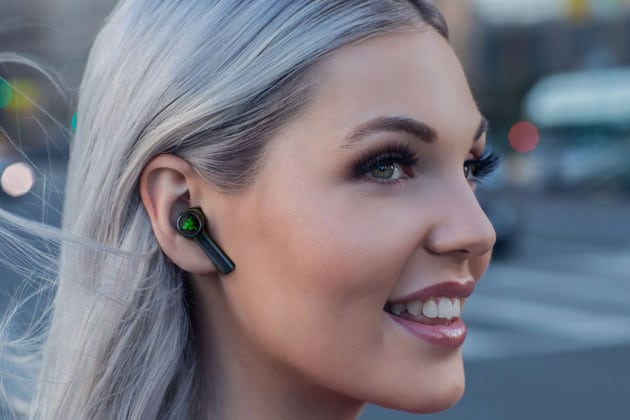 The main advantage of true wireless earbuds is just what we’ve been talking about this whole time – the lack of any wires connecting the two earpieces.

This may seem trivial to some (especially after looking at the price gaps between true and regular wireless earbuds) but it goes a long way for activities that earbuds are generally bought for – exercising.

Whether you’re hitting the gym or just out jogging, you don’t want wires constraining your movement. The switch from wired to regular wireless earbuds was revolutionary for this, as it finally allowed us to stop lugging around our audio devices on our person while exercising. But even though a short and simple wire that connects one earbud to the other isn’t going to restrict your movement in any meaningful way, it can still get irritating, especially if you’re doing cardio where the wire ends up flopping around and repeatedly smacking you on the back of the neck.

Of course, everyone can enjoy the feeling of no wires touching your skin, whether they’re exercising, walking, sitting, or lying down. But that’s basically all there is to it…

… well, that and the feeling of prestige you may get from using such new technology.

Having two separate earpieces is also more aesthetically pleasing than when they’re conjoined by a pesky cable, so those for whom aesthetics are paramount should also look towards investing in a pair of true wireless earbuds.

But that’s where the advantages end.

Now for the disadvantages…

The Disadvantages of True Wireless

This means that there’s still a lot of room for improvement and that the manufacturing process hasn’t yet become refined to the point where we can label the price-to-performance ratio as anything close to cost-effective. Just remember what 4K TVs were like back when they first debuted – exorbitantly expensive.

Nothing illustrates this better than the comparison between the original Samsung Gear IconX and the Apple Airpods Pro. The former is one of the first-ever true wireless earbuds, released back in 2016, and the latter is a much more recent model. The Gear IconX was released with an MSRP of $200 while the Airpods Pro was released with an MSRP of $250, so not an exact match but still pretty close. The older model has a battery life of around an hour and a half while the newer one has approximately four and a half hours of juice in it.

Just from this, it should be evident that the technological jump that occurred within the three years between the releases of these two pairs of true wireless earbuds is immense, and that’s just the battery life! The original Gear IconX also had some issues with maintaining stable connectivity and let’s not even mention the sound quality.

If you’re okay with spending top-dollar just to have the coolest new gadget then go for it, but if not, it’s good to remember that true wireless earbuds will only get better with time and that a day will come when they will not only be supremely awesome but also much more affordable (think 4K TVs again). 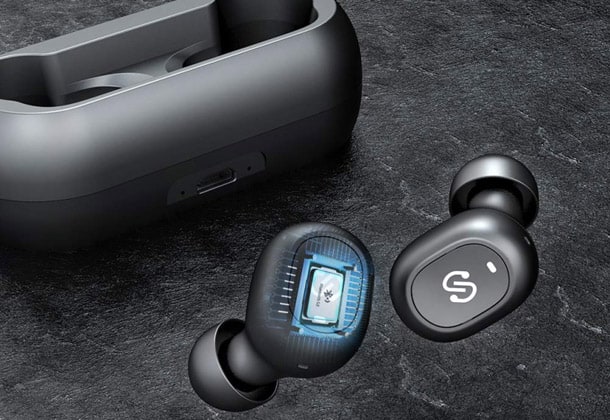 Of course, even a battery life of four and a half hours isn’t really anything to write home about. True wireless earbuds have to accommodate both the batteries and the drivers within a very cramped space. Granted, it’s not as if regular wireless earbuds have more room for these things, but they at least don’t have to maintain a wireless connection between the two earpieces, courtesy of the pesky wire.

There’s just no getting around this.

The lack of a wire connecting one earbud to the other may be a plus in every other regard, but it also makes these earbuds way easier to lose or misplace.

To be fair, though, whether this will be an issue for you all depends on how conscientious you are about keeping the earbuds in the charging box whenever they aren’t in use. These earbuds are generally made with exercising in mind, so they feature some sort of extra hooks or wings to ensure they stay firmly locked in place. Consequently, losing them as a result of one earpiece spontaneously slipping out of your ear is rather unlikely.

But if you’re the type of person who’d just plug them out of your ears and place them on the desk, or wherever seems convenient, then perhaps true wireless earbuds aren’t the wisest investment for you.

There’s just no reason not to keep them inside the charging case whenever you aren’t using them.

Stuff That Stays the Same

Everything else that we didn’t mention is effectively the same between these two wireless technologies. This means that, aside from comfortable and arguably better-looking design, there’s nothing new that true wireless earbuds bring to the table. Conversely, aside from the high price and sad battery life, there’s nothing they subtract from the regular wireless earbuds experience either.

We mentioned that the Airpods Pro sounded better and had a more stable connection than the original Gear IconX, but the sound quality mostly boils down to the drivers and the connection type. The Gear IconX doesn’t have as stable a connection because it doesn’t have the benefit of Bluetooth 5, which all newer wireless earbuds enjoy.

All in all, just don’t expect true wireless earbuds to pack a superior sound as similarly priced regular wireless earbuds. Yes, they’re more expensive, but in this case the extra money does not translate to better performance.

Is It Worth It? 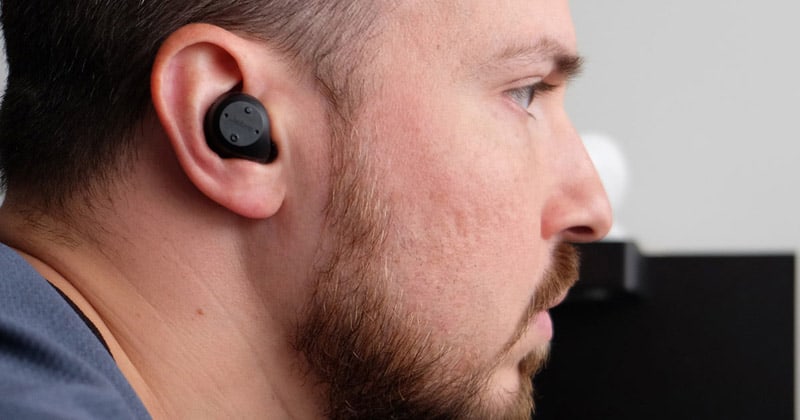 So with all this in mind is it worth it to get true wireless earbuds?

True wireless technology is still relatively new and there’s lots of room to develop. These earbuds are definitely not the more cost-effective option and it may take a couple of years for the price-to-performance ratio to reach a point where we’d feel comfortable recommending true wireless earbuds to everyone.

However, if you hate the feeling of wires on your neck, hate untangling cords, or you just want to experience the feeling of absolute freedom, you won’t regret getting these earbuds.

Just know that you should expect inferior battery life and sound quality than you would get from regular wireless earbuds of the same price. This is a trade many are willing to make, and there’s nothing wrong with that. The right demographic can even get the best use out of the previously mentioned Samsung Gear IconX without any issues (read the full review for tips on how to make it work even today). But it’s a trade-off we want people to be aware of and make willingly.