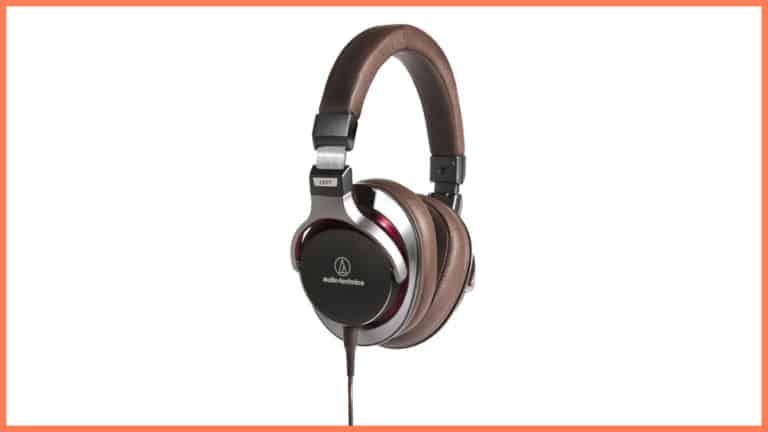 The Audio-Technica ATH-MSR7 headphones are excellent hi-fi headphones that sound so good they can ruin other headphones for you. If clarity and detail are what you’re looking for then you can’t go wrong, just don’t pair them with a smartphone for maximum results and be aware that they will butcher low bit rate tracks.

Looking for headphones with all the fun of consumer-grade products but the sound signature of studio-grade equipment?

It may be a bit of an odd mix-up, but the Audio-Technica ATH-MSR7 walks the fine line between the two quite admirably, not just in terms of sound quality but in terms of looks as well.

But is this jack of all trades also a master of none? That’s what we’ll be looking at in this review, in addition to who these headphones are actually geared towards.

Normally, we leave the sound stuff for last, but in this case, it’s imperative to know just what we’re dealing with here.

Hybrid headphones like these will never satisfy the needs of people firmly planted in either corner of the consumer-to-studio spectrum, so where exactly is their appeal then?

First of all, let’s look at the sound signature. ATH-MSR7’s sound signature is as flat as a pancake. This is normally a characteristic of studio headphones, but the folks at Audio-Technica cleverly bestowed larger mass appeal to it by incorporating one sound aspect that’s very consumer-friendly: the equal-loudness contour.

It sounds more complicated than it really is, but basically, it makes it harder to hear frequencies louder so that there’s a consistent loudness across the spectrum. Together, the flat signature and equal-loudness contour make for quite a unique sound that resembles that of studio headphones while still packing a punch in frequencies that would otherwise be quieter.

We can see right here that these headphones aren’t particularly useful for mixing music where you’ll want frequencies to resonate at their natural levels of loudness.

With professional use out of their intended purpose, let’s see how these headphones fare with regards to pure sound quality across the board and what they can offer to users that the V-shaped sound signature normally present in consumer headphones cannot.

The bass is the biggest point of contention here. Bass-heavy genres are as popular as ever, and being able to feel your music in your chest can make or break your decision to buy certain headphones. At least, that’s the way things stand in the West. However, the situation is completely different in Japan, with the bass not being near as emphasized, even in modern music.

Audio-Technica geared the ATH-MSR7 model more towards their home country than the rest of the world. But don’t think for a second that this makes these headphones unfit for western music. Don’t think of the bass as cranked down; think of it as ‘normal’.

It may not have the sheer power to satisfy a bass head’s needs, but the level of control and detail on the bass is phenomenal; it definitely won’t leave you wanting in less bass-focused genres.

The bass may sound underwhelming if you’re used to the V-signature, but the mids may sound overly elevated and extended at first. If you’re not a bass head and you’ve never experienced flat signature mids before, which isn’t uncommon, then you’ll be in for quite a treat. In particular, the vocals sound amazing.

Then there are the highs. The highs are nothing short of astonishing. They’re so detailed that it can turn into a bad thing. Namely, the high level of detail will reveal even the most minute recording mistake. Furthermore, they can prove problematic when listening to poorly compressed files with low source bit rates.

So while the headphones are top-notch, the user experience can and will suffer if you’re not in the habit of using lossless audio formats. Additionally, the sound quality will vary depending on what you plug them into. It’s not that the sound quality will be particularly bad when using your smartphone, but it will be exponentially better when plugged into a digital audio player.

Before we even get down to the materials and everything else, let’s take a moment to appreciate how phenomenal these headphones look. For headphones that only come in two color options, black and gunmetal grey, they sure hit the nail on the head with both.

The same design philosophy was followed for the looks as for the sound, with the headphones walking the fine line between flashy and minimalistic. There’s enough detail to make them distinguishable but not so much to be attention-grabby.

The ATH-MSR7 headphones are high-end headphones. And when it comes to high-end, form is just as important as function. After all, no one wants to spend a fortune on headphones that sound amazing but that they’d be ashamed to wear in public.

However, this has led some manufacturers into the trap of neglecting sound for the sake of style. Fortunately, no corners were cut when designing the ATH-MSR7. It trades in the all-plastic design of most models for a substantial amount of aluminum, giving it a truly high-end look and feel.

No expenses were spared on comfort either, with the earcups sporting a rather thick layer of memory foam padding. It may feel stiff at first, especially due to the clamping force of the headphones, but this is only until the memory foam adapts to the contours of your ears. After that, there should be absolutely no hiccups, even after prolonged sessions.

As for the clamping force, it truly works miracles. You can run with these headphones, and they won’t fall off, yet at no point do they feel like they’re exerting an unwanted amount of pressure on your ear. Again, this is only after you break them in, but doing so doesn’t take long, and you can expect no ear pain or sweating afterward.

Finally, this all helps with the isolation. These aren’t noise-canceling headphones per se, but they still manage to do a pretty good job of it.

Mid-level clamors like office noises will be almost, if not completely, wiped out, but they won’t protect you from the booming lows of trains, buses, and the occasional unnecessarily loud motorcycle.

The last thing that bears mentioning is portability. These are, allegedly, portable headphones, but they don’t come with all the hallmarks of portability that have come to be expected over the years.

The earcups can rotate, which is neat for when you’re carrying them in your bag or even just for placing them more securely on a flat surface, but the headphones themselves aren’t foldable.

They also come with a leatherette carrying pouch, which, while certainly not bad in and of itself, won’t protect them as much as a carrying case would – and chances are you are going to want to protect your $200+ headphones.

On the plus side, they use a detachable cable, which is always appreciated. The ATH-MSR7 actually comes with three cables: one 3.9′ (1.2 m) cable with a smartphone-compatible in-line button for taking and ending calls and controlling playback, one regular 3.9′ cable, and one 9.8′ (3 m) cable.

The volume control missing from the in-line cable controls is certainly annoying. Although the provided cables aren’t all that great anyway, as they are wholly made of plastic, they do the job just fine, and the fact that they are detachable also means that you can just swap them in for a cable that’s just right.

So at the end of this review, we’re left with the question: who are these headphones geared towards?

Right off the bat, we can say that these aren’t meant for studio use and that dedicated bass heads are better off looking elsewhere. Ideally, this would be the end of that, and the headphones truly would have the widest possible target demographic, especially in a market oversaturated with V-signature headphones.

But this is offset by some inconveniences on the user end that, while not directly a fault with the headphones, are a problem nonetheless.

First, there’s dubious portability. This can easily be overlooked, but the same can’t be said for the smartphone support, or rather, the ‘effective’ smartphone support. What we mean by this is that you simply won’t be able to get the most out of them when using a smartphone.

As with pairing a high-end graphics card and a budget monitor or a professional guitar and a cheap amplifier, the result will be messy despite the high caliber of one of the components.

Like we’ve said, the fault here doesn’t really lie in the headphones, and if you don’t mind using lossless audio files and listening on your computer or a DAP, then you’re not likely to find better closed-back headphones for this price.

They’re even great for gaming because the soundstage provides a great sense of depth. We’ll score them based on what they’re capable of, but…

If you really are a ‘casual’ user who mostly relies on your smartphone for music, you won’t be getting the best value out of the ATH-MSR7. If this is the case, and you’re still looking for headphones that provide a mix of consumer and audiophile elements, then we suggest checking out the AKG K553. 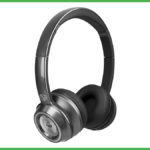