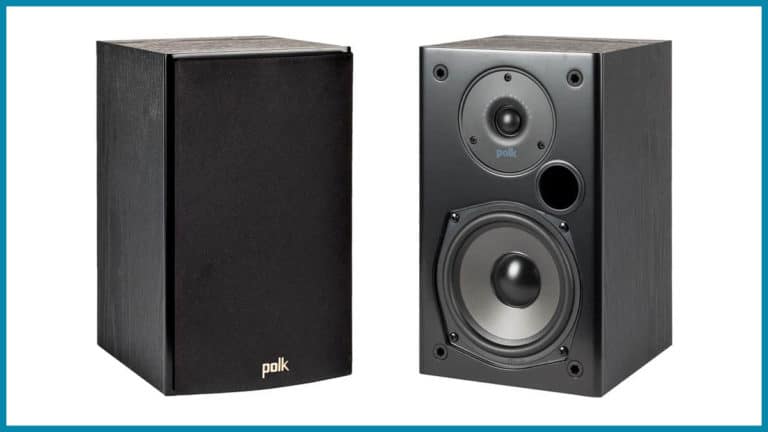 The Polk Audio T15 bookshelf speakers are easily the most cost-effective speakers we’ve seen if the ‘cost’ you want to put in ‘effect’ is minimal. It’s true that the bass doesn’t leave too much room for the other frequencies to shine, but this isn’t the result of the mids and highs being bad. On the contrary, they’re no less than average sounding for this price, but the exceptional bass can make them out to seem that way.

Polk Audio is a reputable and beloved audio device producer known for its wide selection of speakers that span the whole price spectrum.

Still, while their high-end speakers are magnificent, one of their biggest strengths is sparing no expense to make their affordable outings the best they could possibly be. We can think of no better example to illustrate this point than the Polk Audio T15 bookshelf speakers.

So read on if you want to know just how remarkable these affordable speakers are.

How you judge the exterior aesthetics of the Polk Audio T15 will depend largely on how much your wallet influences your taste.

In a vacuum, these are far from the most gorgeous speakers we’ve seen. But, as soon as we start judging the exterior – and the overall build – of the T15 relative to its price and to the competition it has in this price range, things start to look up.

At the MSRP of $100, these are one of the nicer-looking speakers you’ll find. They’re made of a half-inch MDF that’s topped off with a wood-grain texture that’s both appealing and refreshing next to all the vinyl. It also has the benefit of being black, meaning that it will integrate quite nicely into a variety of setups without any problems.

What’s more, the front looks surprisingly modern despite the fact that the T15 is resting comfortably in its winter years. So, visually speaking, rocking these speakers without the grilles on shouldn’t be a problem in most cases, but if it is, the grilles can make them wholly inconspicuous.

So, what can you pair these bad boys with?

Well, they work in a variety of situations: they’re awesome for home cinema and perfectly capable of bringing an immersive experience on their own in a simple stereo configuration. But they can also be used either as front or rear speakers in a surround sound configuration, as they’re fully compatible with both Dolby and DTS.

Then there’s the music, of course, and most of the sound evaluation will deal with how they perform. But we also have to mention that, due to the fairly compact size, these speakers can also work wonders as PC peripherals, delivering a high level of immersion to any AAA-title.

Although seeing as they’re passive speakers, you’ll definitely want to hook them up to an amp to get the most out of them.

This is the only thing that can somewhat hamper their cost-effectiveness; if you’re looking to make a single purchase and be good to go, a slightly more expensive pair of active speakers may end up saving you money in the long run.

We don’t think this is a bad thing. In fact, having passive speakers is, in many ways, preferable, but there’s definitely an audience who’d appreciate a simpler ‘plug-and-play’ product over this.

Overall, the speakers are well made and sturdy, and to testify to this, Polk slapped on a 5-year warranty onto the T15. This is a nice and reassuring bonus, but you more than likely won’t be using it.

Certainly more impressive than opting for a nice wood-grain texture is the fact that the Polk Audio T15 packs some rather remarkable hardware for its price!

This is what truly separates it from the rest of the riffraff that you can find at this price range. Instead of including only the bare minimum, the folk at Polk went the extra mile to ensure the T15 is a genuinely impressive affordable offering.

And given how it’s withstood the test of time, we’d say this effort hasn’t gone unappreciated.

As for the drivers, you have one 0.75″ silk/polymer composite dome Tweeter and one 5.25″ mineral-filled polymer composite cone Woofer. What’s more, these are both Dynamic Balance drivers, using proprietary technology that isn’t always featured in affordable models, and both speakers are sonically matched for the best performance.

Granted, the smaller-than-average tweeter dome will decrease some of the dynamic range, but it will increase the dispersion, so there are pros and cons.

In addition to this, you also get the benefit of magnetic shielding.

What this means is that you won’t have to suffer any signal interference from cables or nearby devices when using the T15. You can comfortably charge your smartphone right next to the speaker, even receive calls and messages, and the T15 will ignore it like it’s that last week’s pile of garbage that you forgot to take out.

As a final note, we have to say how much we appreciate the bass port being on the front.

People like to make a bigger deal out of where the port is placed than it warrants; this is largely an aesthetic thing. But in this case, having the port in the front enables the benefit of the speaker being physically capable of accommodating a screw slot on the back for wall mounting, which is always a perk.

Couple this with the compact size of the T15, and you’ve got yourself a pair of speakers that you can fit literary wherever you see fit. They work well on shelves, desktops, walls; you name it. What’s more, they even come with adhesive rubber pads that you can stick to whichever side of the speaker you decide is the bottom.

As always, the sound is where it’s really at. No amount of makeup can make poor-sounding speakers good, but simple and basic solutions can still be excellent just by the merit of their sound quality. So how does the T15 stack up?

In all honesty, it sounds better than it should.

The overall sound is very warm, but while we could say that it lacks some detail, this wasn’t too surprising. You can’t get everything for this price, but the T15 still has a lot to offer.

The imaging is really good, and it boasts an expansive and enveloping soundstage that works just as well with live performances as it does with studio recordings.

Plus, they can be impressively loud for their size and with minimal distortion too.

As for the frequencies, we like how the T15 handles the bass. These are definitely bass-heavy speakers, and even without a subwoofer, they’ve got some genuine power behind them; way more power than you’d expect from speakers of this size.

The dynamic range is also just unbelievable on the low end, even without a subwoofer.

The sub-bass is a bit weak, but still, we don’t think even bass heads will be left wanting with what the T15 has to offer on its own. And, of course, pairing it up with a subwoofer can’t hurt.

The mids are also pretty good. Voices aren’t really the T15’s forte, but they are, at the very least, average for the price. You won’t ever find them lacking in multimedia, but it’s fair to say you’ll get a bit more out of the T15 if the music you listen to isn’t vocal-heavy.

To clarify, the mids aren’t at all bad or neglected; they just aren’t above what you’d expect for the price like the bass is.

If there’s any frequency that can come across as somewhat neglected, at least at first glance, then that’s got to be the high treble, as it is a bit receded.

It’s not bad per se, but it does very much take a back seat while the other frequencies drive in the front. Depending on what type of music you listen to, this can even be a good thing since the treble does tend to get artificially boosted in recordings nowadays.

If you’re not a fan of shrilling highs, you won’t mind this, but even if you are, it’s not pronounced to the point where it should make or break your decision to buy these speakers; especially since you can use an amp to add a level of detail to the highs very easily.

So, are the Polk Audio T15 speakers the best speakers ever? Heck no!

But they’re phenomenal when you add their price to the mix, and this is how we handle scores in our reviews. Even at the MSRP of $100, these have a lot to offer. Still, when you consider the fact that these are fairly old speakers that are on discount more often than not, they become the ultimate budget solution, with a capital A for Affordable.

The price doesn’t get any lower than this without seriously compromising the sound quality.

We find the design to be gorgeous for such an inexpensive model, and the specs inside it have aged really well.

So if the T15 tickles your fancy, we suggest buying it sooner rather than later as we can easily see the model getting discontinued in the near future, although waiting for the next sale to get them at a hefty discount certainly won’t hurt.

On the other hand, if you want something similar but a bit more powerful and pricey, check out our review of the Klipsch R-15M.