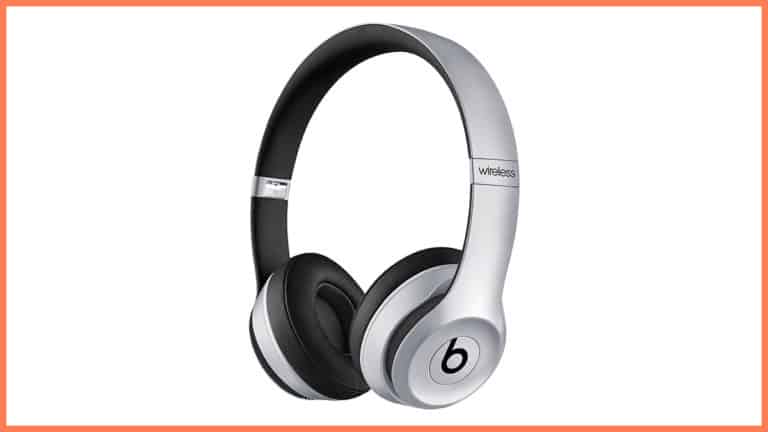 The successor to one of the most popular headphones models ever, the Beats Solo 2 Wireless are exactly what a good sequel should be: better than the original!

But their wireless variant is a bit iffy.

Let’s just get this out of the way real quick:

The Beats Solo 2 Wireless headphones are by no means bad. They were certainly a top contender when they got released. But it’s been almost five years since then, and, as things stand, they just have too much working against them to be the most optimal purchase.

This doesn’t necessarily mean that they can’t be just right for you, so let’s see what these headphones have to offer.

Headphone reviews tend to be very audio-centric for the most part, which is understandable; after all, it’s the most important aspect to consider.

In these review circles, Beats were notorious for their style-over-substance approach. This sentiment has been repeated so many times that you’d be forgiven for thinking this is all there is to Beats headphones.

It certainly used to be the case, but then the Beats Solo 2 Wireless came and broke that stereotype. As we’ve said, these headphones are a great improvement from the original Solo headphones. They’ve noticeably reduced the style-to-substance margin by delivering a superior sound quality while retaining the stellar style of all the Solos that were and have since come to pass.

They’re available in red, blue, white, and black, with matching accessories for each color. If you like a slightly more inconspicuous look, the black version is probably your best choice. If you want real attention grabbers, go with the red. Beats has got you covered in either case.

Comparing these wireless headphones to their wired counterparts can’t be helped because they’re essentially the same headphones in many regards. However, Beats did add some tweaks to the wireless version.

For starters, wireless headphones are generally heavier than their wired counterparts, which is especially evident when you have two variants of pretty much the same model. This really can’t be helped all that much because the wireless headphones have to fit the battery as well as a lot of additional technology into the earpieces.

Yet surprisingly enough, the Solo 2 Wireless headphones weigh only marginally more than the wired headphones do. This may not seem like all that big a deal, but the fact that they’re this lightweight really speaks volumes about the lengths the engineering team went to when crafting these.

We also have to mention that the Solo 2 Wireless headphones are mostly made of plastic. Of course, the plastic isn’t cheap by any stretch of the imagination. It’s quite twisty and bendy, and it definitely doesn’t look like it will break at the mere thought of being dropped…

… but it’s still just plastic. It’s durable enough for most people, and you can definitely fling these headphones into your backpack without much worry, but if you’re prone to dropping headphones, you should probably look elsewhere.

Also, they don’t feature active noise-canceling, which is rather strange given these launched at $300. The passive isolation is solid, but we don’t think settling for decent is something you want to do when you’re spending this much money.

The plastic design was no doubt implemented to make the headphones lighter. At 215 grams, you can definitely say that they’re quite the lightweight contenders, but there’s more to comfort than just weight.

Usually, the second thing that’s taken into consideration after the weight is the padding. The ear pads are quite nice. The padding is soft and thick, thicker even than it is on the wired version. The earcups swivel to ensure the best fit. Yet these headphones still feel uncomfortable.

Well, the culprit here is something that’s rarely considered and, granted, not really printed out along with the rest of the specs: clamping force.

The clamping force on these headphones is unreasonably powerful. Let’s not sugarcoat it; they pinch! Unless you particularly enjoy the feeling of being pinched, you won’t enjoy wearing these for prolonged sessions.

They’re stable enough for you to comfortably jog with them without a care in the world, but that’s not really a plus when it comes to the detriment of its intended target demographic – everyone.

It might seem weird to dedicate a whole segment to the cable for wireless headphones, but there’s actually a lot to talk about here.

First of all, the Solo 2 Wireless headphones come with two cables. One is your typical charging cable. You pop it into the right ear cup, and it charges up the battery, pretty straightforward.

But there’s also a second cable that you can jam into the left ear cup. This one is used to turn these wireless headphones into wired ones. It has an in-line remote with all the standard features: a microphone, volume control, pause/play, and track skipping.

Also, in case you were wondering, you have access to these features even when you use them wirelessly. They’re all neatly integrated into the ear cup, not that you could tell just by looking at the pictures.

The battery life is advertised at 12 hours, and that’s what it approximately delivers. If you like listening to music during commutes, then these should probably last you a good week before running out of juice.

If not, 12 hours is still a pretty respectable figure. There’s also a cool LED light on the ear cup that shows you how much battery you have left, so if it does die, it’s all on you.

The last thing that bears mention is that the charging cable uses a micro USB port. It bears mentioning because Beats, in case you didn’t know, is an Apple company, so naturally, they use Apple’s proprietary lightning port.

However, while the Solo 2 Wireless headphones were released after the Apple acquisition, they were developed before that. So if you have a craving for Beats but aren’t an iPhone user, these headphones will be very convenient.

So we come to sound quality. It used to be that the sound was the weak link in Beats headphones. But don’t worry, this isn’t something you have to worry about with the Solo 2 Wireless. What’s even more impressive is that these wireless headphones sound exactly like the wired version, which is rarely the case.

Certified audiophiles will pick up on the slight compression, but for wireless headphones to sound this much like their wired siblings was unprecedented.

As for the sound, it wasn’t as if Beats reinvented themselves, but they certainly refined their signature sound. Of course, the bass is the most dominant frequency, but thankfully this no longer comes at the expense of mids and highs.

Overall the sound is warmer and clearer and makes for some rather powerful vocals. There’s some distortion, but you’d have to crank the volume up to inadvisable levels to hear it.

The problem is just that the competition is fierce. Yes, they sound great, in fact, they sound as good as the wired version, but they’re also a full $100 more expensive. That’s a lot of money just for Bluetooth, especially when you’re already paying a lot just for the Beats logo. Plus, they’re also not particularly comfortable.

They’re just not cost-efficient. If we observed them in a vacuum, they’d be very good, but there are simply many better headphones or even headphones that are almost just as good for much cheaper.

We can’t say in good conscience to give them a pass, as there’s nothing wrong with them aside from some comfort issues, but if you’re going to buy them, find them at a discount because you could get so much more for $300.