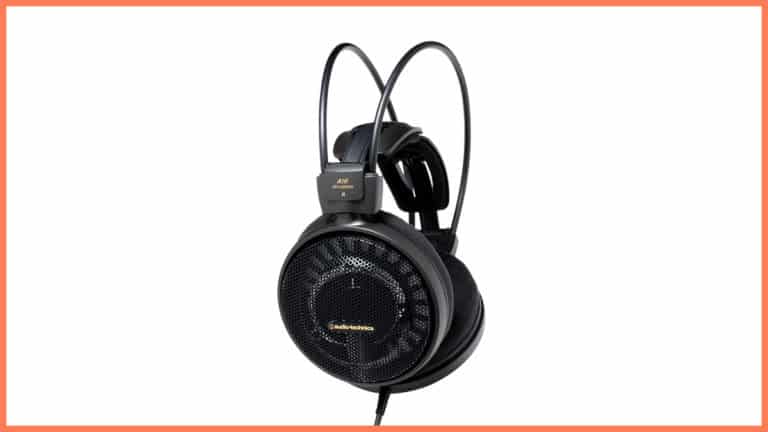 The Audio-Technica ATH-AD900x headphones have an excellent, detailed, high-fidelity sound but are bogged down by the fact that the 3D wings are made of plastic. The sound signature is a bit unusual, although this is nothing that can’t be tweaked out. You definitely won’t regret getting them at a discount, but we can’t 100% recommend them at the full price of $300.

The Audio-Technica ATH-AD900x might seem like a simple revamped version of the original beloved AD900 headphones, but it’s so much more.

The ATH-AD900x headphones certainly stand out from the crowd with the lack of a headband and gigantic honeycomb earcups, but are they a direct improvement on the original?

Right off the bat, these aren’t the kind of headphones you accidentally mistake for a different pair. With their almost cartoonishly large earcups topped off with black honeycomb covers revealing the drivers, these are very unique-looking.

That’s even without mentioning the omission of a headband in favor of a hassle-free 3D wing support system that you’re probably hesitant about.

However, whether you love the design or not, it doesn’t really matter too much because the ATH-AD900x aren’t headphones that a lot of people are going to see you wearing anyway.

Basically, they’re indoor headphones, and there are a couple of design features that truly cement them as such.

The reason relevant to the build has to do with the materials used. The ATH-AD900x is, for the most part, made entirely of plastic, and it doesn’t feel like the most premium plastic at that, either. But the most worrisome aspect is that the 3D wings are made from the same plastic, and since there’s no headband, they’re the only thing keeping the headphones on your head.

This means that should they break, and they look like they very well could, the external grills would default as a headband, dropping the earcups low enough to treat only your neck to the great audio.

Now don’t get us wrong, they have a quality build and are sturdier than they look, but breaking is not out of the question.

Of course, while the plastic is a deterrent, it doesn’t outright make them horrible for outdoor use… but the cable does! The 3-meter, non-detachable cable practically spells ‘indoors.’

We’re never glad to see non-detachable cables in high-end headphones, especially when the cable seems this unexceptional. It’s also made of plastic, and seeing as cables are usually the first thing to kick the bucket in a headphone, this could have a seriously negative impact on the overall longevity here.

And it’s a real shame when we consider the low impedance. They sound pretty good even when you pair them up with a simple smartphone. A detachable cable wouldn’t solve the other portability issues, but it would make the possibility more viable.

Also, let’s not forget that these are open-back headphones. This may very well be the best thing about them, but you may as well carry an old-school radio player over one shoulder if you’re going to listen to these headphones in public. It honestly wouldn’t be any less inconvenient for the people around you.

Of course, we won’t be scoring them for portability; open-back headphones simply weren’t designed for that.

Once you come to terms with this, if you haven’t already, we’re confident you’ll find a lot to enjoy here, but we had to emphasize this point just to be on the safe side because people generally think closed-back when they think of headphones.

We’re also happy to report that the bass doesn’t bleed out, which sometimes tends to be a problem with open-back headphones.

In terms of comfort, the ATH-AD900x hits the nail right on the head… if you can wear them. Its biggest strengths are the overall lightweight of the all-plastic design and the substantial layer of padding.

The driver is also angled so that your ears won’t ever make contact with it, which sometimes happened with the original ATH-AD900.

But the 3D wing support system is rather hit-or-miss. If you have the head for it, it’s excellent. It’s completely hassle-free, so all you have to do is place the headphones on your head, and you’re ready to go; no need to adjust the headband or tinker with the clamping force.

It feels a bit odd at first, but the novelty soon wears off, and you won’t feel like you have anything on your head, not on the ears, not on the top of your head, nowhere. The velour-covered ear pads are very breathable too. You can wear these headphones for five hours without any problems.

Although the earcups can sometimes drop a bit lower from where they were initially placed, this is only a mild inconvenience as readjusting them literally takes only a few seconds.

However, if your head is too big or too small, the wing support simply won’t function as intended, rendering them almost unusable and uncomfortable.

Before we get to the overall sound quality, we have to talk about the soundstage because it really deserves a segment all unto itself.

The soundstage is generally a strong point in open-back headphones, so we were expecting greatness, but the ATH-AD900x has a simply phenomenal soundstage that exceeds expectations.

In fact, it’s so vast that it can even give a ‘live’ feel to some songs that you may not want to listen to this way. But that hardly sounds like a criticism.

What this does is make them great for gaming and multimedia. You’ll get a real cinematic sound when watching movies with these headphones, and in gaming, the pinpoint accuracy of the soundstage borders on cheating.

The sound quality was also surprising, but not in the same way the soundstage was. It’s not bad by any means, but we were expecting a sound signature more akin to that of the original ATH-AD900.

The 900 sounded flat, meaning that no frequencies were boosted or lowered, but that’s not the case with the 900x.

The changes to the bass were to be expected. The bass is deeper and more extended but still not boomy, refusing to sacrifice detail and accuracy for the sake of loudness. This was a welcome change, as it gave us a more punchy sound without betraying the Audio-Technica sound for something more along the lines of Beats.

Speaking of the Audio-Technica sound, the vocals are just what you’d expect. The midbass is not that great, which in turn means that the male vocals are a bit underwhelming, but female vocals sound simply gorgeous.

However, the most striking difference was the fact that some of the higher frequencies have been turned down. For example, the highest octave on the piano sounds almost half as loud as it did on the original ATH-AD900.

Now, this isn’t unheard of. Many people prefer to have certain frequencies turned down a notch, and this is definitely one of them, but it’s a curious changeup, to say the least, given the flat sound signature of the original.

You can always equalize this away if it’s a problem, but it takes some know-how and can be a hassle.

If we had to sum up the sound of these headphones in one word, it would be ‘airy’. There’s some roll-off in the mids, and they’re a bit bright, all things considered, so we wouldn’t recommend them for creating music, but they’re nothing less than excellent for listening to it.

Other than that, there’s not much to report. The tracking is very good, and you’d have to turn the volume up way past the unhealthy threshold to hear any sort of distortion, and even then, it’s minimal.

The ATH-AD900x headphones feel more like a standalone model than a revision of the original ATH-AD900 because of certain changes to the frequency response.

The bass was improved and makes them viable for a wider selection of genres, from classical music and jazz all the way to rock and hip-hop. Bass heads certainly won’t be impressed by them, though.

Even though their value is somewhat dubious for the $300 MSRP, it’s not because of the sound quality but rather the plastic exterior, especially the 3D wing support system. All of these things can be forgiven, however, at their street price, which can easily go below $150.

The audiophile-grade sound, coupled with such an affordable price, easily makes the ATH-AD900x one of the best headphones for getting into the audiophile hobby. 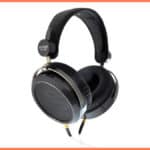