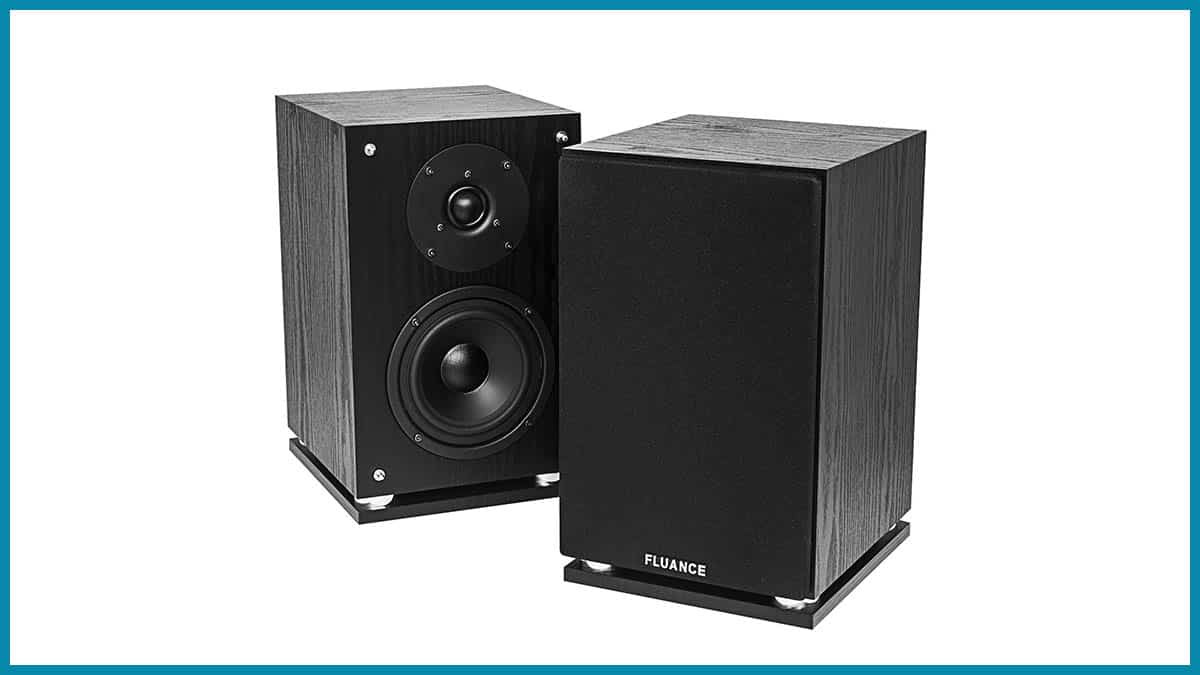 It’s incredible what range of premium features the people at Fluance were able to pack into the very affordable SX6. Their bass may be unexceptional for some modern genres – though it can still pack a punch – but if you want a pair of affordable speakers that portrays the human vocals at their best then look no further!

High quality comes with a high price tag, right? That seems to be as much a rule in the audio business as in any other. But as with all rules, there are bound to be exceptions, and that’s precisely what the Fluance SX6 is: an exception to this rule.

So if you’re searching to buy an astoundingly cost-effective pair of speakers that’ll sound better than what you paid for then you may just have stumbled across a model like no other.

The first thing you’ll notice about the SX6 is that these speakers are fairly large for bookshelf speakers. Not unreasonably big, but if you’re planning on pairing them up with your TV make sure that the shelves around it have enough space to accommodate them.

They can also work well in a desktop environment paired with a PC, but again, you’ll need a big desk to use them properly (and not just a wide one, but deep as well, as you’ll want to keep these speakers a good foot from the wall so that the rear port can function unimpededly).

Now the speakers themselves are fairly easy on the eyes. The exterior is made out of audio-grade MDF that’s then covered in a vinyl veneer finish – that’s pretty standard stuff, nothing to write home about; although if we had to choose between either the sound or the looks to be exceptional for the price, we would choose the sound every time.

Still, they don’t look bad by any means, and you can see that Fluance tried their best to make these speakers unique and cool-looking.

This design philosophy is most apparent in the thin layer of MDF that’s stationed beneath the actual feet of the speakers and doesn’t serve any practical purpose whatsoever. If these speakers didn’t sound as good as they do we would have bemoaned this point profusely as pointless spending that could’ve been better spent elsewhere. But as things stand it’s okay, it doesn’t detract from the sound.

Also being able to choose between two color options (ash black and natural walnut) is certainly appreciated. Plus, if you should not like the front of the speakers at all, you can cover them completely with the grilles.

Still, the bigger-than-average size does translate into a bigger-than-average sound, meaning that these speakers will work great in any home environment, even if you need a pair of speakers to complete your home theatre. They can be used as either front, side or rear speakers, although they can be a bit inconvenient in some setups since they don’t have matching centers.

What truly sets the SX6 apart from most of the company it keeps in this price range, however, is the inclusion of some very premium components. Its 1-inch dome tweeter, for example, uses high-performance magnets to ensure you get the best listening experience $130 can buy. And the same goes for the 5-inch Woofer with a Butyl Rubber surround for increased performance and durability. The tuned bass rear port also helps with the low frequencies if you give it enough breathing room.

Other quality of life perks include but are not limited to magnetic shielding that eliminates all interferences that other nearby signals relish in producing, Butterworth audio crossovers for improved equalization, and the 18 gauge internal lead wire that aids in the battle against signal degradation.

This is indeed an impressive range of features, many of which nobody would have blamed Fluance for not including in such an affordable product, but we just wish they also included a screw for wall mounting. Once again, these speakers are a tad bigger than what people normally have in mind when they think ‘bookshelf speakers’, so being able to mount them on a wall would really help sell these to people who can just not accommodate the size.

Sure, you’d probably want the bass port in the front then, and not just so that you would have room for the screw, but this may have been doable if the extra layer of MDF beneath the feet weren’t there. It’s not like this is a huge issue, but it’s something that we think the speakers could have benefited from.

What’s more, owing to the somewhat larger than average sized of the SX6 the two drivers are actually separated by a decent margin, which allows for some genuine speaker separation.

So, what kind of sound do all of these features come together to produce?

Wholly unimpressive. The overall sound is a bit too bright and the bass feels somewhat weak. Of course, this is only until you give them time to settle. Once they’ve had proper time to break-in, you can expect a truly magnificent sound from the SX6 that’ll fix these issues to the point of no longer detracting anything from the listening experience.

Once they get cozy and comfortable these speakers become phenomenal. They sound big, with an expansive soundstage and exceptional imaging. The bass is still decent at best. But these speakers can get loud – in fact, the sound only gets better as the volume increases – and the bass can get palpable. It won’t be enough to satisfy any bass head, but other listeners won’t be left wanting. The sub-bass, however, has more bark than bite in it, with mostly a decent rumble and little else. Of course, this is nothing that a subwoofer can’t fix, but even then, the frequency response just isn’t tuned to favor bass-heavy music. If you want an affordable pair of speakers that are bass-heavy, check out our review of the Polk Audio T15 instead.

But what the SX6 does have to offer are incredible mids and magnificent highs. Vocals on these speakers sound amazing – they sound clear and rich and have a strong presence that can make you weep. The only time when you won’t feel like the mids are the speaker’s strongest suit will be when you’re listening to the highs. Then the mids will kick back in and you’ll restart the whole process over and over again.

Orchestral music may actually be the SX6’s forte, at least from a technical standpoint, as you can hear all the different instruments come together brilliantly into a coherent whole yet feel separate and distinct. And they will make you feel like you’re right there in the live audience, seeing the violinists sway in their seat as they transition seamlessly from note to note. This level of immersion is just unprecedented for the price; so much so, in fact, that it’ll feel jarring once you snap out of this trance and realize that the violinists aren’t there and you’re just looking at a box that’s nom-nomming on electrical currents and producing sound by jiggling the drivers really quickly.

In summation, the Fluance SX6 is one of those rare products that defy the laws that correlate price and quality. These speakers may look like most of their typical vinyl veneer peers, if a bit overgrown, but this is only when they’re standing mute in a crowd. As soon as they open their mouth to sing, however, it’s clear that they’re a cut above the rest.

Are they for everyone? No, especially given how prevalent bass-heavy music is nowadays. Sure, they can keep up just admirably once you throw in a sub-woofer and a good amp and tinker with the response a bit, but if this is the type of music you listen to exclusively, then we feel it’s always a better choice to get something that was made specifically with that in mind, like the Polk Audio T15.

Still, if you need a pair of speakers that can do the whole range of frequencies justice, and especially the vocals, then you can’t go wrong with the SX6. It doesn’t get any better at this price range.