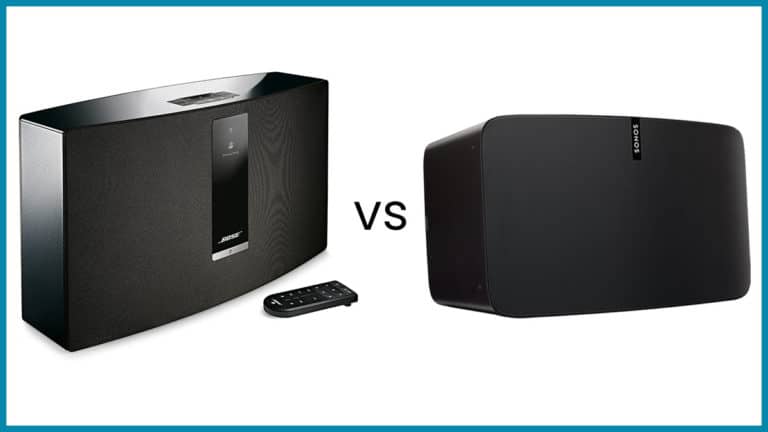 If you’re looking to purchase a $500 whole-home audio system and you’ve narrowed your choices down to these two, you can already be sure you’ll make a great decision.

Both the Bose SoundTouch 30 and the Sonos Play:5 are easily tied for the title of the best portable whole-home audio speaker.

Honestly, you can’t go wrong with either of them.

However, these two speakers are by no means identical. That’s why we’d like to use this opportunity to dissect all the ways in which the SoundTouch 30 and the Play:5 speakers differ from one another.

So without any further ado, let’s begin.

The first thing we need to look at is the design. After all, judging a book by its cover is in human nature. Sure, both of these speakers sound great, but how do they stack up as articles of home décor?

If you’re looking for a stylish yet inconspicuous audio system that can seamlessly blend into a minimalistic background, the Sonos:Play 5 is a godsend.

Its compact footprint, elegant all-black exterior, and touch buttons on the top all come together to make sure the Sonos:Play 5 is a speaker that you can place anywhere; you can even place it vertically if that’s more to your liking.

The white version can give it some additional character, and it pairs nicely with the back grilles without drawing too much attention – a thing of beauty to behold, but not one that screams for attention. Yet while there’s certainly a lot to like here, there’s very little to show off.

If, on the other hand, you want an audio system that can stand front and center in your living room, demanding the attention and admiration of you and your house guests, you’ll love the Bose SoundTouch 30.

It’s a slightly larger and heavier speaker with a prominent logo, an OLED display that lets you know what song is currently playing, clearly distinguishable buttons on the top (which are sorely lacking the Play/Pause button), and grilles that accentuate the color pallet brilliantly in a way that’s tasteful rather than flamboyant.

You have two color options here – black or white – but it packs enough different hues in both versions to make it a distinguishable piece of eye candy.

Of course, no matter how thrilled a Christmas present can get us, our excitement quickly subsides if the contents of the present aren’t as impressive as the wrapping paper. Luckily for us, both of these speakers provide a wealth of features that will keep you entertained for a long time.

If there’s one key feature that truly defines these speakers, it is expandability.

Both the Bose SoundTouch 30 and the Sonos Play:5 can be expanded by installing additional speakers respectively and linking them together. This is the feature that makes them whole-home audio systems, regardless of how large your home may be.

However, $500 is no small amount to give for a speaker. So, if you’re looking to make a one-and-done purchase, the SoundTouch 30 is a slightly better choice. This is the larger one of the two speakers, and as you’ll see later on, this makes for a louder speaker. It sounds even better when paired with another SoundTouch 30, but even just the one will be enough for most users.

If, on the other hand, you’re looking to buy the first of many speakers which will make up an expansive audio system, then we have to give the edge to the Sonos Play:5. Once a dedicated sub-woofer is thrown into the mix, the Play:5 manages to sound better than ever as it can channel all of its power on what it does best.

But more on that once we get to the sound section.

Still, there’s so much more to these speakers than just expandability.

For example, both audio systems come with their own apps. These apps have some overlapping features (like Alexa and Google Assistant support), but there is a noticeable discrepancy in the overall quality and number of features presented in the apps.

For example, the Bose 30 app does not support AirPlay. So, if you’re a dedicated Apple user, this is already an enormous red flag.

As far as streaming services are concerned, it supports all the huge names (Spotify, iHeartRadio, Amazon Music, Radioplayer, QPlay, TuneIn, Pandora, Deezer, and SiriusXM), but this list is only a mere fragment of the streaming services that its competitor supports and it gets even smaller depending on your location.

As far as sound customization is concerned, you’re only given free reigns over the bass.

Overall, the Bose app is serviceable but nothing more.

The Sonos app, on the other hand, has one of the best control apps on the market – it’s intuitive, it looks awesome, and, most importantly, it has loads of additional features. For example, in addition to the many streaming services we’ve mentioned, this app also lets you stream directly from YouTube.

If you like to stream most of your music, then you’ll likely want to lean on the side of the Play:5. Not only does it support AirPlay, but if you use the iOS version of the app, there’s a TruePlay feature that automatically adjusts the tone to fit the environment. You can also mess with the sound options however you see fit – the app places no restrictions on you.

It’s vital to remember that you’re not buying just the app. It so happens that the SoundTouch 30 has more to offer in terms of other features.

For starters, it makes up for its okay app with the physical remote. Some of the many buttons on the speaker are programmable and can be synced to your favorite stations (although it still bothers us how they managed to omit the Play/Pause button).

As far as connectivity options are concerned, the Bose speaker has Sonos beat.

The Sonos Play:5 is a Wi-Fi speaker through and through, whereas the Bose SoundTouch 30 also supports Bluetooth connectivity. Granted, you’re much more likely to use the Wi-Fi connection, but having Bluetooth support for those rare occasions when you do need it is certainly a big advantage.

The only downside here is that you will be forced to use Bluetooth connectivity if you want to play downloaded music from your phone, which is a real shame.

Both speakers also feature 3.5mm inputs and Ethernet ports on the back, just in case you want to put these speakers someplace where your Wi-Fi signal may not be able to reach all that well.

So far, things have been leaning more in Sonos’ favor, but inconveniences like the SoundTouch 30 only being able to stream downloaded music from your phone via Bluetooth can be overlooked for the sake of better sound quality.

So how do the SoundTouch 30 and the Play:5 compare to each other regarding sound?

Well, we have to start off by saying that both speakers perform great. These are $500 systems, after all, and the sound quality isn’t south of what you’d expect for this kind of cash. In fact, even though these are stereo speakers, they can hold their own against many 2.1 wireless configurations.

As far as the volume is concerned, we have to give it up for the Bose SoundTouch 30. In terms of raw decibels, the SoundTouch 30 has the Play:5 beat; it even outperforms it in terms of distortion (or lack thereof). The frequencies do get a bit jangled up when you crank the volume up to eleven, but the sound doesn’t distort.

The bass, however, is the real MVP here, offering a truly palpable listening experience that goes beyond what most 2.0 speakers are capable of.

This isn’t to say that the Sonos Play:5 has a weak bass – it’s admirable, but it just doesn’t have the raw power that the SoundTouch 30 has.

Overall, we’d recommend the Sonos Play:5 to those of you who prefer a more relaxed listening experience, with great driver separation (courtesy of the six drivers stacked inside this speaker) and a rich sound that makes vocals sound incredible.

As you can see, it all depends on your preferences. There isn’t really one clear winner here. Both of these audio systems do certain things better.

The Sonos Play:5 is a lightweight, inconspicuous speaker that offers great sound customizability and supports a plethora of streaming services. It’s not a speaker you should pass up lightly, especially if you’re an Apple user that can take advantage of the remarkable TruePlay feature.

But if you’re looking for a one-and-done kind of deal, then there’s a lot to love about the SoundTouch 30. It’s louder and has a magnificent bass response, considering what it manages to accomplish without a dedicated sub-woofer. Most importantly, the mids are still very intelligible, despite the heavily emphasized bass.

In either case, you can’t do better if $500 wireless whole-home audio systems are the name of the game.

However, if you’re looking for something a bit more portable (and more affordable), check out this comparison article of the Studio 2 and Studio 3 wireless speakers by Harman Kardon. 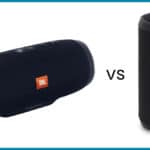