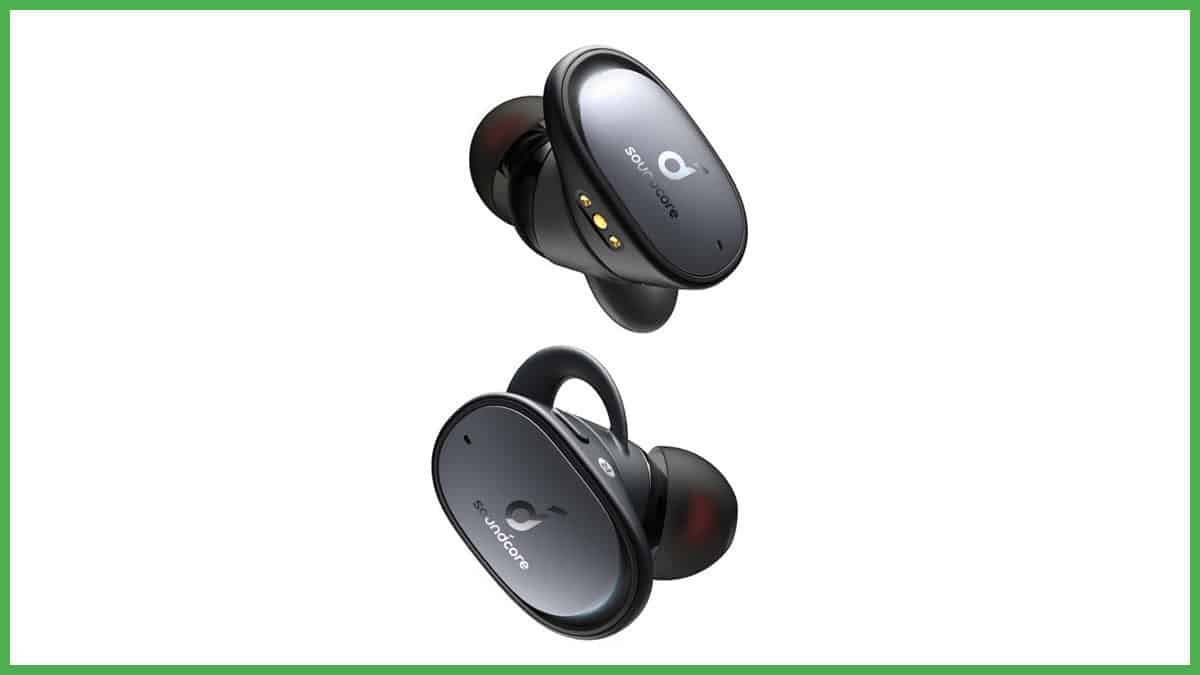 Soundcore Liberty 2 Pro is the promise of audiophile-level sound quality realized in a pair of affordable true wireless earbuds. It also has an exceptional battery life and loads of cool features. It may not be the best looking pair of earbuds, or the most comfortable one, but in terms of audio quality it exceeds all expectations associated with its price.

This seems to be the common consensus among consumers these days, in the audio market as well as other markets. Sure, those looking for the best performance will likely stick to good ol’ cables for the stability they provide, but otherwise, cables are unwanted, plain and simple.

Except now we have the Anker Soundcore Liberty 2 Pro earbuds that pack an enormous amount of features and great sound for just $150? Sounds too good to be true!

So let’s see if it is true and what exactly the Liberty 2 Pro offers.

The first thing you’ll notice about the Liberty 2 Pro earbuds is that they are big. Even the charging dock is twice roughly twice as big as those of other models. This also means that the earbuds are a bit on the heavier side. And the bulky part that sticks out of your ears really sticks out.

We aren’t huge fans of this.

However, there is a great reason behind this hefty build – the Liberty 2 Pro is packed full of features. Most importantly, it features Astria Coaxial Acoustic Architecture (or ACAA) drivers. Take a look at this video for a visual presentation of what this means, but the short of it is that the Liberty 2 Pro features dual-drivers that are placed on top of one another (coaxially) in a way that enhances the overall audio quality – the bass frequencies don’t interfere with the mids and highs and vice-versa. So at the very least, you can rest easy knowing that the bulky exterior is the price you pay for enhanced sound quality.

Furthermore, there is a button on each earcup that can be used to issue all sorts of commands – from pause/play, volume control, track skipping, voice assistant activation, and so on. There’s only one catch: you have to choose which of these controls you’re going to assign to the buttons through the Soundcore app. There are only so many commands a single button can differentiate from, so it’s up to you to make the tough choice.

Now you might be asking: With earpieces that big, don’t the Liberty 2 Pros fall out of your ears?

Thankfully, the answer is a firm no.

And to ensure this, the folk at Soundcore decided to ship these earbuds with no fewer than seven pairs of ear tips and three pairs of ear wings of varying sizes. It takes some fiddling around to find the right fit, but once you do the earbuds just click into place and they do not abandon their post. Not unless you jerk your head around too much, at least. This should tell you all you need to know about using them when exercising:

Activities like jogging or weight lifting (in most cases) where your head doesn’t flail around present no problem for the Liberty 2 Pro. But exercises like rope skipping are another thing entirely. It’s not as if the earbuds will just jump out of your ears with no prior warning; you will feel the need to readjust them fairly often. But if you can’t readjust them (as is the case while rope skipping) then you should either adopt a different workout routine or get different earbuds.

However, just because the earbuds won’t fall out of your ears does not mean they’re comfortable for lengthy use. No matter how snug the fit, these things are heavy and bulky (and plastic, although the plastic, in this case, does not feel cheap or flimsy at all), so expect some discomfort after prolonged use. On the bright side, they come with an IPX4 rating for water resistance, meaning they are sweat and splash-proof, you don’t have to worry about that while exercising.

It would seem the battery didn’t get the memo about the earbuds not being the best for long marathons.

According to Soundcore, it has 8 hours of juice in it. In all of our reviews, we have to specify that the actual battery life can be shorter, sometimes substantially, depending on the volume at which you listen to music, but this is the one review where we have to opportunity to say the opposite! Eight and a half hours from a single battery charge is not unattainable here, and it’s not like you have to reduce the playback to a whisper to get this. Bravo, Soundcore!

There’s also a fast charging feature that’ll net you 2 hours of playback for just 10 minutes of charging. And speaking of charging, the charging dock itself holds up to 24 hours of playback in it, so altogether you can expect to get a good 32 hours out of the Liberty 2 Pro without needing a cable. What’s more, you can circumvent cables altogether, as the dock supports Qi wireless charging. Otherwise, the dock uses a USB-C connection to charge up. To keep track of how charged up the dock is refer to the three LED indicators.

All in all, the battery life is definitely one of the stronger aspects here, which isn’t surprising given that Anker is a company known for its wireless chargers.

Before we get to the sound evaluation, we have to talk about the features here.

As we’ve mentioned in the introduction, the Liberty 2 Pro is replete with cool and innovative features. The 11mm ACAA drivers are just the tip of the iceberg.

For starters, these earbuds come equipped with Bluetooth 5.0, resulting in a powerful signal that is as unconcerned with a few walls blocking its path as the Hulk would be. It also features both AptX and AAC support, so you don’t have to worry about any lip-synching issues while streaming videos, regardless of which device you do this on; Androids, iPhones, laptops – the Liberty 2 Pro is equipped to handle them all.

Each earbud is also equipped with two microphones that can be used for either taking calls or enabling the Transparency Mode.

Voices picked up by the microphone sound very thin, which is the biggest downside of the earbuds so far, but frankly, this is just an extra feature and not part of the core experience, so we don’t mind it that much. The microphones also come with ambient noise-canceling, so even though your voice will sound thin, you can rest assured that no background noise will interfere with it. As for the Transparency Mode, it lets you hear your surroundings through the earbuds by recording them via the four microphones. It’d be a lot more impressive if the passive noise cancellation were better. As things stand, this feature seems a bit redundant.

As mentioned, the Liberty 2 Pro supports both Siri and Google Voice Assistant, but whether or not you’ll be able to make use of this feature will depend on how highly you prioritize it over something like track skipping through the Soundcore app.

And speaking of the app, it also lets you choose between more than twenty EQ presets. Unfortunately, you can’t fully tinker with the EQ settings yourself, but the app is equipped to tailor it to your hearing through the HearID feature. Once you start HeadID, the earbuds will play different frequencies and all you need to do is let the app know when you stop hearing the frequencies. The app will then create an EQ made to suit your hearing.

For something that could’ve easily turn out to just be a gimmick, HearID works surprisingly well. We’d have still preferred the option to customize the EQ ourselves, but this feature, along with the presets, will work better for casual users who don’t understand the role each frequency plays.

Really, the only thing we have to complain about is the fact that pairing can be a pain. Each earbud has to be paired separately, from inside the dock. They only turn off when you close the dock with the earbuds in them, and even then they can keep playing music on very rare occasions. And while you can pair them to two devices at the same time, switching between them is a hassle and a half.

Now, as cool as all the extra features and the battery life and the ear tips and ear wings galore are, at the end of the day, the reason we purchase earbuds is to listen to music. Some are purchased primarily to be used while exercising – and they then prioritize durability and comfort over sound – but this isn’t the case with the Soundcore Liberty 2 Pro.

So is the sound quality here worth the asking price of $150?

In fact, they sound almost as good as the AirPods Pro. They can’t compete with the Airpods Pro in terms of extra features, but as far as audio quality is concerned they’re not far behind. And given that they cost a whole $100 less, we’d say this is an incredible deal.

The sound profile is a bit bass-heavy, but not to the point where it drowns out the other frequencies. There’s just enough emphasis placed on the lows to inject some more excitement into your music. If you’re not a fan of this, the EQ presets do an okay job reigning in the bass. But otherwise, the bass is powerful and hard-hitting. The same goes for the mids. They are a bit receded on stock settings, but the app can fix this for you no questions asked.

Plus, these earbuds can get loud. And the way they handle high volumes is exceptional, although we don’t recommend turning them up to max volume, for your hearing’s sake. Regardless, if loud is what you want, loud is what you will get.

Furthermore, the audio separation is magnificent. Every instrument is distinct, even though the soundstage isn’t too wide.

The only problem we have with the sound is that there is some audible hissing present at low volumes. This shouldn’t ever be a problem while listening to music, but if you’re using the earbuds to watch movies, you’ll notice the white noise while the actors stay contemplatively silent. It’s not loud enough to ruin the experience, but it is there.

In conclusion, is the Soundcore Liberty 2 Pro the best thing to happen to true wireless earbuds?

That depends. If you’re looking for the most comfortable pair or the nicest looking pair of earbuds, you can do better. The same goes for certain features, like active noise canceling, which can be found in some similarly priced models.

But if audio quality is the name of the game, you can’t do better at a budget of $150.