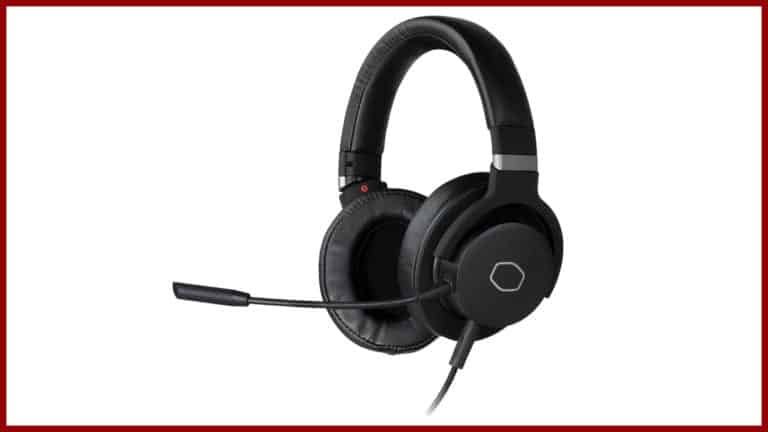 The Cooler Master MH751 is a headset that does everything right – the comfort is superb, the microphone is incredible, the audio is great, and even the unique low-profile design is attractive in a sea of headsets adhering to the same “gaming” aesthetic.

That said, it’s not a headset that is going to elevate your gaming experience to new heights. Instead, the MH751 offers unmatched versatility, which some gamers will appreciate less than others.

The gaming headset market has become highly saturated, making it difficult for new headsets to stand out – even when they’re objectively great – as they’re always compared to the gold standard.

This is what happened to the Cooler Master MH751 when it launched with an MRSP of $100. It’s a good headset, but at the $100 price range, there are certainly lots of better options for you to choose from.

Why are we starting the review with this sentiment?

Well, Cooler Master has figured out that gamers aren’t going to dish out $100 for an MH751, so they reduced the price. As of the writing of this review, the Cooler Master MH751 goes for $90 at full price and is known to get discounted quite substantially.

Let’s see why exactly this is.

The Cooler Master MH751 is one of the most inconspicuous gaming headsets we’ve reviewed. Make no mistake, this is a gaming headset, but it’s so sleek, elegant, and unobtrusive that you could easily wear it outdoors. Plus, there’s nothing flashy about the all-black exterior, with only a hint of branding on the ear cups.

Honestly, with the microphone detached, we’d never guess that this was a gaming headset based on just the exterior. The earcups even swivel a full 90-degree to make the headset more comfortable to wear around the neck.

The in-line controls are a bit further down the cord than we’d like, making them a bit inconvenient to grab in the heat of the moment, but since the volume control and mic mute are the only options available, this isn’t a huge issue.

Now, despite all of this, we still wouldn’t recommend taking the MH751 outside to stand at the mercy of the elements. Aside from the metal adjustment band, this headset features an all-plastic construction.

We’re, of course, talking about high-quality plastic that’s quite sturdy and twisty – this isn’t some flimsy headset by any means – but it still doesn’t possess the kind of durability that outdoors-friendly headphones should have.

The MH751 is also a bit smaller than most gaming headsets, packing 40mm drivers instead of the standard 50mm ones we’ve come to expect from most models. Nevertheless, it’s perfectly capable of accommodating even larger heads, thanks to the lengthy adjustment band.

This, in tandem with the swivel we’ve already mentioned, ensures the fit isn’t an issue for most people.

If you’ve heard anything about the MH751 before reading this review, chances are you’ve heard how comfortable the headset is. It really is one of its strongest suits.

The foam ear cushions don’t have a particularly thick layer of padding, but it still doesn’t leave anything to be desired when worn. There’s even a spongy layer of padding on the driver wall that prevents your ears from coming into contact with the driver should they somehow manage to sneak past the ear cushions.

The same goes for the headband padding – it’s not extravagantly generous, but it has no issue getting the job done without causing any pain or discomfort.

This is largely thanks to the super lightweight design of the headset. The MH751 weighs only 250 grams, thanks to the plastic design and smaller drivers.

Moreover, Cooler Master has managed to construct the headset so that the clamping force is just right. You get the feeling that the headset is hugging your head like a pillow, yet it still maintains a good sense of stability. Consequently, even though the ear cushions are covered by a leatherette layer, your ears don’t sweat or get hot like they would with other leatherette headsets.

Overall, the MH751 exceeded our expectations with regard to comfort. If you need a headset that can see you through lengthy gaming marathons with no sweat and you aren’t a fan of meshed ear cushions, you owe it to yourself to give the MH751 a chance.

Another high point of the MH751 is its detachable omnidirectional microphone.

This is, without a doubt, one of the best-sounding microphones you can find in a headset at this price. At the lowered price of $80 or less, the competition isn’t even close. This mostly has to do with the fact that there’s no compression here. Your voice is very natural and full-sounding through this microphone.

But there is a catch!

Since the microphone uses an analog connection, it’s not privy to many of the perks we’ve come to take for granted in USB microphones.

For example, it offers no noise cancelation. Everything that’s happening around you – and we do mean everything – will be picked up by the microphone. If you’re using a mechanical keyboard, especially one with blue switches, know that all your online teammates will want to strangle you to death with the headphones’ very own cord!

We’re exaggerating a bit here, but there is truth to this statement as well. Granted, many games don’t require you to go to town on your keyboard like you’re writing an essay, but this is something you should be aware of prior to purchasing the MH751.

We’re also huge fans of the locking mechanism used to keep the microphone in place. When you insert the plug into the headset, it stays there just fine, but if you twist it at the stem, the headset locks it in place.

It’s such a simple yet highly effective (and satisfying) design that we’re surprised we haven’t seen it in more models yet.

So, while the microphone is phenomenal, it requires a quiet environment to truly shine.

Typically, when a headset excels in certain aspects, it tends to fall short in others. So far, we’ve said nothing but good things about the MH751. Sure, it has some quirks, but its design is overall refreshing, the level of comfort it provides is incredible, and its microphone is arguably the best this price range has to offer so long as you can use it in a quiet environment.

Does this mean that the audio is underwhelming?

Absolutely not! But it does sound unique, which may turn off some gamers.

Namely, the MH751 has a rather flat sound signature, or at least substantially flatter than most other gaming headsets.

This means that the bass isn’t as overly accentuated. There’s no rumble here. Instead, the bass is rather tight and controlled. There is a great sense of depth and detail to it, and it doesn’t spill over into the other frequencies. Overall, we found the bass rather impressive.

But at the same time, there’s nothing exciting about it. Whether this is a bug or a feature will depend on your personal preference.

Aside from this, the mids are overall good, and the highs are quite smooth. With a sound this balanced, the MH751 is just as suited to music listening as it is to gaming. In fact, it even passes for audio monitoring. We found the instrument separation noteworthy and the soundstage grander than we’d expected, given the closed-back construction.

We also have to point out the better-than-average stereo imaging, which in games endows this headset with a good sense of depth despite the lack of virtual surround sound support.

In terms of negatives, the sound isolation isn’t the best, largely due to the more relaxed clamping force. Furthermore, there is some distortion at higher volumes. Thankfully, you’d likely need an amp to get the headset to run that loudly in the first place.

These are unsafe levels of loudness we’re talking about.

Overall, we quite enjoy the audio that the MMH751 has to offer. The smooth and balanced sound signature makes it quite versatile and a great pick-up for gamers who need a headset for non-gaming-related tasks as well as for gaming.

If, however, you’re looking for a headset that will make your gaming experience more exciting, you should look elsewhere.

This was one of the trickiest headsets to properly evaluate since it delivered on so many fronts but still failed to outshine the already established standouts at the $100 price range.

We’re huge fans of the inconspicuous design; the level of comfort offered here sets a standard that other leatherette cushion headsets should strive towards; the microphone easily beats most of the competition at the $100 price point, provided it can be used in a quiet environment; and the audio felt very compelling.

As we’ve said, there’s value here. But how much will depend on what price you find this headset for. If you can find it for $80 or less, we give it our strongest recommendation.

Otherwise, the competition is just so stacked that it doesn’t manage to stand out unless you’re primarily interested in the versatility it offers.