The AKG N200 is a serviceable pair of wireless earbuds, but we wouldn’t purchase them without a hefty discount. It simply lacks any kind of hook in the form of a special feature that will grab consumer interest.

What it does, it does well – like offering good codec support, multi-connectivity, and AKG audio quality – but it simply doesn’t do enough to warrant its full price in such a competitive market.

AKG is a brand with a proven track record and loads of goodwill behind it.

The company has earned this reputation by delivering excellent audio at much more reasonable prices than its competition.

But while you can expect everything AKG puts out to be competent, not everything they touch turns to gold, leaving their portfolio with a few devices that make you scratch your head and wonder:

Is this worth it?

In most such cases, the answer isn’t yes or no. It lies in the middle, where the device is entirely worth it but for a very specific target audience, as with the AKG N60.

So, let’s see whether the AKG N200 is worth it for anyone, no one, or just a specific few.

The AKG N200 is a pair of wireless earbuds that retail for about $150. They aren’t true wireless earbuds, mind you – you still have a braided wire connecting one earpiece to the other. This alone is enough to make them feel dated, which you’ll find is a recurring theme with these earbuds.

That said, the device itself is fairly light, weighing in at just under 16 grams with the cable. It’s available in three color options – black, blue, and green. And it also comes packed with a lot of goodies, like four different-sized pairs of ear tips, a hard carrying case, and even a cleaning tool.

The earpieces feature small ear wings that help relieve some of the pressure that the earbuds would otherwise place on the ear canal, therefore making them more comfortable to use for extended sessions.

The chord features a flap that you can use to tighten or loosen it. This is a handy feature to have, especially while exercising, where you would otherwise quickly grow annoyed at the cable slamming into your neck like you were a horse with reins.

It’s also worth mentioning that the metal housings on the earpieces are magnetic, allowing you to stick the two earpieces together and wear the earbuds like a necklace when you aren’t using them.

The flap, magnets, and braided cable make the N200 a pair of earbuds that can be used in all sorts of ways.

The cable also houses an in-line control unit that functions as a three-button universal remote. It can be used to enter pairing mode (an LED indicator light will let you know when you’ve done this correctly), to control the playback and volume, and so on.

The volume up and down buttons are well separated, meaning you won’t ever find yourself accidentally pressing one over the other. And since they use actual buttons, you can turn the volume up or down quite rapidly.

This in-line control unit also houses a microphone, but more on that later.

The AKG N200 can go for 8 hours of playback without needing to recharge.

At the time of its release, this battery life was respectable, and it still holds up today.

The inclusion of fast charging makes it even better, which will net you a whole hour of playback for just 10 minutes of charging. Again, this isn’t an impressive amount, but again, the N200 relies on an unimpressive Micro-USB cable for charging.

Like many AKG devices, the N200 doesn’t come loaded with a plethora of features.

It does, however, have some very useful features. For example, it supports SBC, AAC, and aptX, so you can enjoy high-quality audio despite the wireless connection.

As for the connection, however, you’re stuck with Bluetooth 4.1, which – like the Micro-USB connection – was already becoming outdated when these earbuds were first released. Nevertheless, the connection is still strong and remains stable for approximately 7 meters, which isn’t too shabby.

What might be most important, however, is the fact that the N200 can be connected to multiple devices at the same time. And switching between devices is easy to do thanks to the intuitive controls.

Of course, if you don’t like controlling the earbuds manually, you can always default to a voice assistant. The N200 works with all voice assistants, regardless of the operating system of the device it’s connected to.

And as for the microphone, we can’t really say any good things about it other than that we’re glad it’s there only so that you can issue commands to voice assistants.

Otherwise, using the in-line microphone for regular phone calls might lead the person on the other end of the line to consider doing unspeakable things to you with the very cord connecting the two earpieces together.

Now you might be thinking that after packing the N200 with a bunch of outdated tech the sound quality will deliver something truly spectacular.

Unfortunately, the reality of the situation is much less spectacular.

The N200 sounds good. That’s all we have to say. We’ve yet to hear an AKG device that doesn’t sound good. And, not to name any names, but in a world where people go out of their way to buy trendy earbuds that don’t even sound good, we could certainly use more good-sounding earbuds.

In particular, the bass here is impressive, as it manages to reach deep into the lower frequencies with clarity and precision. More importantly, the bass doesn’t sound good at the expense of the other frequencies, as it never oversteps its boundaries.

This means the N200 has a rather neutral-sounding feel to it that goes well with all sorts of music genres while still packing a lot of kick with its bass.

However, we don’t have as much to say about the mids and the highs.

For what it’s worth, the mids are solid; nothing to write home about, but nothing to complain about either. On the other hand, the highs can end up sounding harsh. And as there are no ways to tinker with the EQ options, what you see (or hear, in this case) is what you get.

We also have to commend the N200 for its wide frequency range, excellent clarity, great sound isolation, and powerful volume. This makes it so that you won’t have to crank things up to eleven just to appreciate some of the finer details in the music you’re listening to.

This is something you shouldn’t ever do in the first place, as it can be devastating for your ear health.

If this sounds good, then the only other thing you need to look out for is interference, which the cord can pick up quite easily when it comes into contact with clothing.

That said, if you don’t limit yourself to AKG’s site, you can find the N200 for way less. At the time of writing, Amazon had these earbuds listed at $58. At this price, they’re a worthy contender, with decent battery life, excellent codec support, good audio, and multi-connectivity.

If you want extra features, you should look at alternative options. They’re not that hard to find around the $60 mark, but they likely won’t have as strong a foundation as the N200. 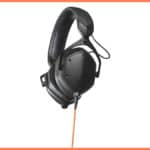